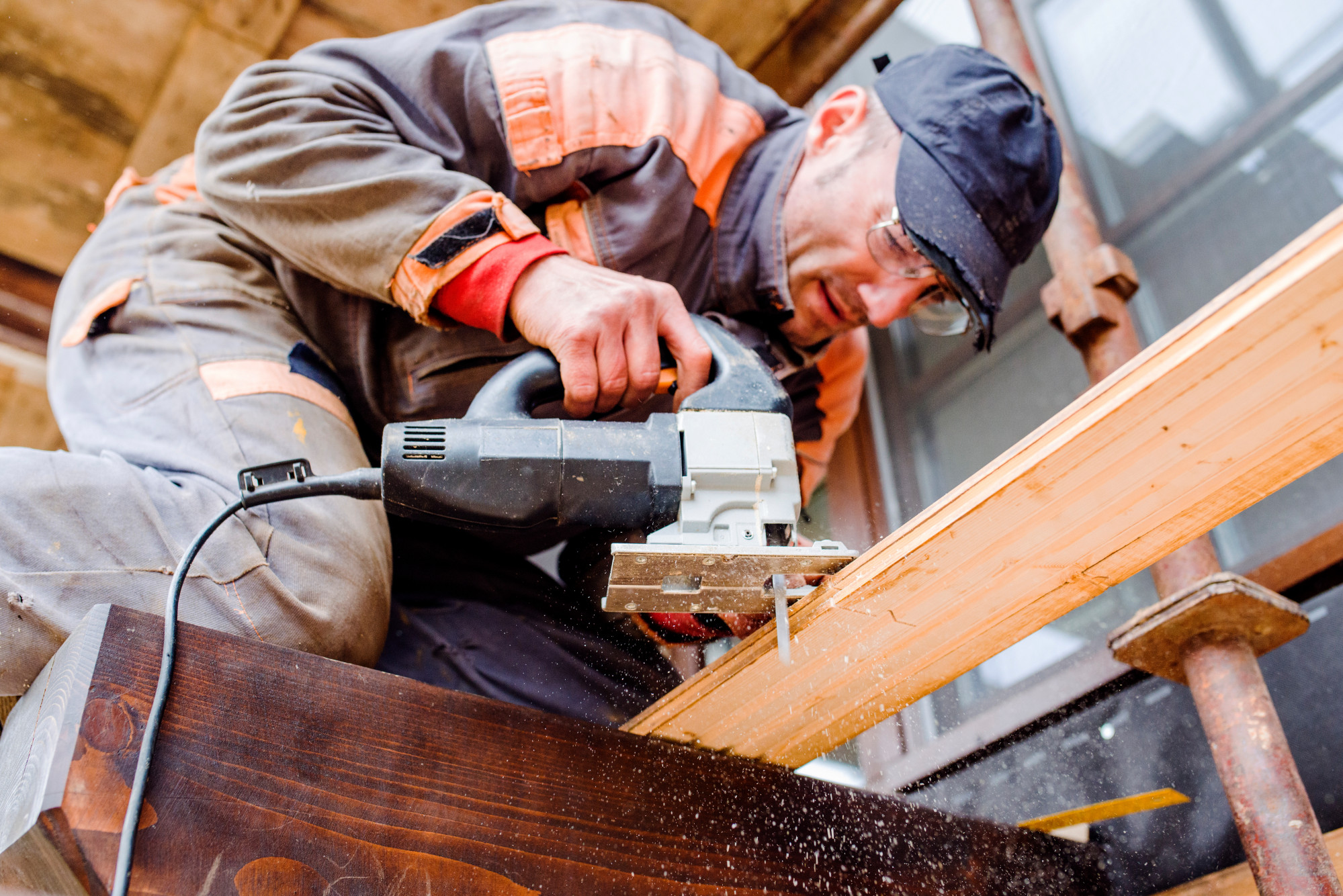 Are Lasers Just a Gimmick?

We may receive a commission when you use our affiliate links. However, this does not impact our recommendations.

Lasers are popping up on all sorts of tools. Are they useful – or just clever marketing? We investigate.

Editor’s note: David asked this question way back in 2005, but with tool manufacturers still putting lasers on all sorts of tools, it remains relevant.

I f you take a look at all the new tools that are now sporting laser-guidance devices (disregarding laser levels – we’ll come back to those shortly) you’ll notice that in general the tools are designed for the do-it-yourselfer category, not the professional. Do the professional woodworkers know something that everyone should know? We think so.

I reviewed all the woodworking tools available online and found the following tools equipped with lasers for a variety of promised benefits: drill presses, miter saws (a lot of miter saws), jigsaws, levels (an unbelievable number of levels), drills, circular saws, band saws and even a scrollsaw.

Don’t get me wrong, lasers are really cool and if I find a tool with a laser on it, I want to give it a try. But the reality is, many of these tools don’t benefit in performance from the addition of a laser, though their sales might benefit because of lack of knowledge.

So where did all these lasers come from? The first tools to add a laser were levels. This was a commercial application for an installation problem and it worked well. Installers hanging drywall, construction workers sighting walls, ceilings and more benefit daily from an accurate, level line that doesn’t have to be erased. Since that successful inception, the technology has become so affordable that there are laser levels popping up for home use at a great price. Good for us, because these can be handy tools to have in the toolbox!

But before you run out and buy one, I do want to point out something that may escape your attention when you’re being blinded by the ruby light in the checkout line: Professional laser levels will generate an accurate line up to 100′ and maintain a +/– 1 ⁄ 64 ” level of accuracy. I’ll buy that, but it’ll cost me $200. A consumer laser costing about $40 will give a +/– 1 ⁄ 8 ” accuracy at 14′. I think you get the point. It’s not the laser’s fault, it’s the levelling platform that is built around the laser itself. It still comes back to the accuracy of the bubble level used to set up the laser. So shop with knowledge about what you’re buying.

B eyond levels, what other tools benefit from the addition of light amplification by stimulated emission of radiation?

Once lasers started getting really affordable, they began appearing on miter saws. Is this a good idea or bad?

Well, it’s generally good, but it might not be the best thing for you. Using a miter saw has always posed the difficulty of lining up the blade with your mark on the board. You get used to bringing the non-spinning blade down to the work to check your cut. Then you bring the blade back up, start the motor and make your cut. By adding a laser that can tell you exactly where your cut will be on the board without bringing the blade down, you cut your time in half. So laser miter saws are good.

That is, unless the laser mark isn’t accurate, you can’t remember which side of the blade it indicates, it moves during the cut, it can’t be adjusted or it requires the blade to be spinning at speed before you can position your board.

All of these are difficulties that have arisen on the many models of miter saws now sporting lasers. Not all of them are bad, but if you don’t trust your clever laser, then you end up aligning the board with the laser, still testing the mark by bringing the blade to the wood and then making the cut. Now you’ve added a third step to the two-step process.

Some saws use twin laser emitters that put parallel lines on the work indicating both sides of the blade, so there’s no question where the cut will occur. The laser is switched independent of the motor and can be used without the blade spinning. Both laser lines are adjustable to compensate for misalignment or when using a thinner blade. If you can’t pop for the dual laser, find a single laser that adjusts easily and works without requiring a spinning blade.

You’ll need to decide if your work will benefit from a laser miter saw, but look at one that offers benefit rather than sizzle.

The first time someone told me that Craftsman had a drill press with a laser guide, I started to laugh, then stopped. Just like a miter saw, the drill press requires bringing the cutting tool to the work to align the cut. So the idea of a laser to guide the way does make sense on a drill press.

Craftsman isn’t the only one offering a laser-guided drill press these days. Some manufacturers offer integral lasers and others are aftermarket accessories. All give you a set of crosshairs to identify the center of the bit, rather than a single straight line.

The caveat with the drill press lasers is making sure they can be easily adjusted if they’re off-calibration. The concept itself is sound, as long as it can be accurately adjusted. So laser drill presses aren’t a gimmick.

This one I like and I’m glad to see it. Granted, I’m a woodworker, and the circular saw is more of a construction tool. But I use one on many occasions to get sheets of plywood down to a manageable size for my table saw. And I’ve never been able to use the silly notch in the base plate to align the blade accurately with my cut line. Maybe I’m not leaning far enough to one side or the other, but I’m always missing the mark by 1 ⁄ 8 ” or so.

By adding a simple laser to the front end of a circular saw, suddenly I know where that blade is going to cut. And that’s an empowering feeling! Could it be better? Sure! Give me dual-laser lines so I’m sure to cut on the right side of my line.

T his is the side of the street where marketing has taken the driver’s seat and reason has been bound with duct tape and tossed in the trunk. Just because you can put a laser on a tool doesn’t mean you should.

Don’t get me wrong, I love a jigsaw. I don’t know what I’d do without one. But I need one so that I can cut curved and circular patterns in wood. There’s no portable power tool that can, as efficiently, cut out a reindeer for the front yard or the scrollwork for a hutch.

But these projects make my point for me; They’re curved. Sure, you can try to cut a straight line with a jigsaw, but it’s likely to look more like an undulation than an underline. So what good is shining a crease-straight laser line on the board if the saw isn’t capable of following it anyway?

Chalk one up for the marketing team in this category. Sure they’ll sell a bunch of them, but they’re better off putting a light on the front of the jigsaw (which they have, thank you) than a laser.

Ack! If a jigsaw isn’t an appropriate use for a laser, how in the world is a scrollsaw even conscionable? A straight line is the opposite of what this saw is designed to cut! And unlike a jigsaw, scrollsaws use thin enough blades that you can actually track a decent straight line, even if it is only 1″ long.

And even if you’re a woodworker who uses your scrollsaw for straight work, why do you need a laser to follow the line? It’s right there on the board in front of you where the blade is touching it.

Putting a laser on a scrollsaw is redundant at best and just silly in our opinion.

Putting a laser on a band saw is a debatable concept as to whether it’s a useful idea, but I think I’ll argue against it.

While band saws are capable of cutting  a straight line, and they do get used for that purpose, there are physical forces involved that make it unlikely to be useful to add a laser.

Even if you can adjust the laser for drift every time you change the blade, it sounds like a lot more work than it’s worth. It’s a nice try, but no, it’s a gimmick.

The drill/laser essentially throws two perpendicular lines ending at the drill point. Company officials argued that it would allow you “square” projects, and assist in horizontal and vertical drilling.

It would be one thing if the laser would indicate if the drill is being held in a perpendicular attitude to the work surface. This would be quite helpful. Unfortunately that’s not what the drill’s laser did.

Nope, I’m not buying it. Figure out how to make the laser show perpendicular accuracy and I’ll move it out of the gimmick column.

While I can’t guess how many more tools will arrive on the market with lasers attached, I’m willing to predict that many of them won’t last through the first sales season.

I’m also willing to predict that the tools that do make sense will stick around. It’s your job to control those shopping urges until you consider the applications for a new laser tool. If you need a laser just to own a laser, buy a laser pointer … they’re cheaper.

Here are some supplies and tools we find essential in our everyday work around the shop. We may receive a commission from sales referred by our links; however, we have carefully selected these products for their usefulness and quality.

I {hope| wish} you {enjoyed| appreciated} this {article| short article| post| write-up}. {Don't| Do not} {forget| fail to remember| neglect} to join our {team| group} {and| as well as| and also} {get| obtain} a {newsletter| e-newsletter} {send| send out} to your inbox.
Source: https://www.popularwoodworking.com/tools/are-lasers-just-a-gimmick/
5 days ago
previous post next post
We use cookies to ensure that we give you the best experience on our website. If you continue to use this site we will assume that you are happy with it. Ok